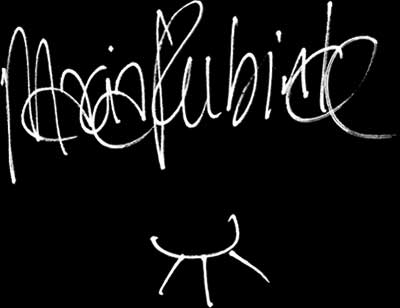 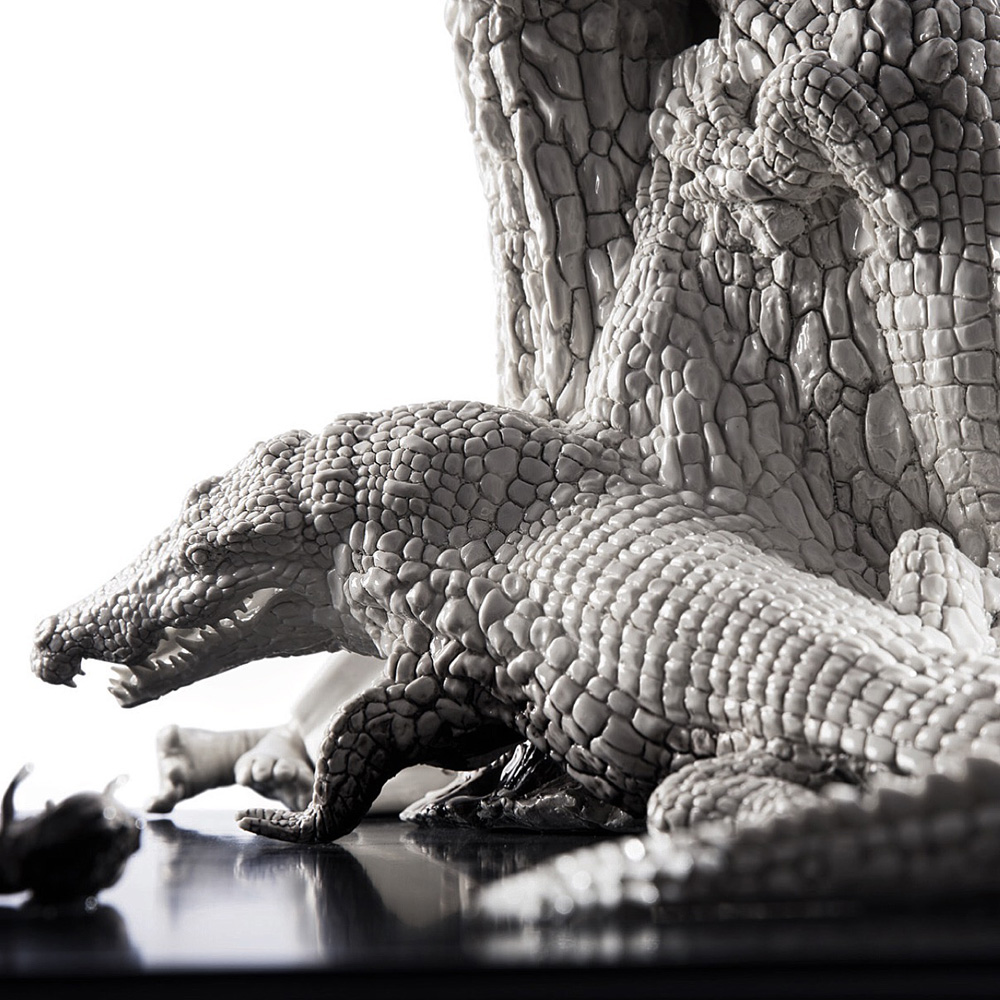 VOLTA NY is the invitational fair of solo artist projects and is the American incarnation of the original Basel VOLTA show, which was founded in 2005 by three art dealers as a fair “by galleries, for galleries”.

Since its debut in New York in 2008, Artistic Director Amanda Coulson re-conceived the format as a rigorously curated, boutique event — along the lines of a sequence of intense studio visits versus a traditional trade show environment. Since then VOLTA NY showcases relevant contemporary art positions from emerging international artists, from cutting-edge trendsetters to next year’s rising stars. Coupled with its approachable solo-booth format, the VOLTA team has created a fair that is both accessible to younger art-lovers and beloved by seasoned collectors alike. By spotlighting artists through primarily solo projects, VOLTA NY refocuses the art fair experience back to its most fundamental point: the artists and their works. A beacon for creative discovery during Armory Arts Week, VOLTA NY is likewise aligned with some of the best and boldest local cuisine and design collaborators in the city.

In March 2016, VOLTA NY returns to PIER 90 in the neighborhood of Hell’s Kitchen, New York City, adjacent to The Armory Show, the longtime anchor of Armory Arts Week on Piers 94 and 92. The Armory Show and VOLTA NY are affiliate fairs that provide complementary visions of the international contemporary art world. Both fairs share mutually acknowledged VIP access.

ABOUT OUR AFFILIATE FAIR //

Established in 1994 and held annually on Piers 92 & 94, The Armory Show is New York’s premier international art fair. Offering ambitious programming, curatorial initiatives, and specially commissioned projects, The Armory Show combines access to high quality modern and contemporary art with a commitment to spotlighting new and emerging voices in the visual arts. Now in its 22nd year, The Armory Show remains a highly-anticipated event on the global arts calendar, connecting the world’s leading galleries with international collectors, curators, and art professionals in the capital of the art world.

Danish-born artist Maria Rubinke‘s small porcelain figures are reminiscent of the illogical compositions of surrealism, transforming the character of what are traditionally charming and passive objects into expressions of more taboo feelings that oscillate between desire and sadism.

For the exhibition at Volta NY the gallery has planned to showcase different sculptures interpreting the triptych “Garden of earthly delights” by Hieronymus Bosch dated from 1490 and 1510, with heaven, earth and hell as their focal source of inspiration.

In a known dramatic way Maria Rubinke exposes little innocent porcelain figurines (girls) to pain and suffering through different variations of sculptures. The symbolic language is powerful throughout the exhibition where Rubinke uses classic symbols like the lamb, an apple and the snake from the Garden of Eden as a reference to the Creation and the Fall of Man.

Like the Surrealists, Rubinke thematizes the complexity of the human psyche and works in a formal idiom all her own. She refers to surrealism and tries to reproduce the mental state of mind, with a personal symbolism.

The sculptures are all very detailed and meticulously executed. For the art fair the works will be displayed on specially made pedestals of wood and steel placed in a themed order around the booth without the classic glass showcase. All the sculptures are unique pieces and created specially for Volta NY .

Maria Rubinke has been working with the classic porcelain figure since her graduation from the School of Glass and Ceramics on Bornholm in 2008. She allows the incomprehensible and chaotic in the human subconscious to rise to the surface in her sculptures. The pure white porcelain surface attracts the gaze of the viewer, but at the same time distorts our presuppositions when the small porcelain girls are slowly broken down and subjected to contrast-filled madness.

Maria Rubinke studied at the School of Glass and Ceramics on Bornholm in 2008. Later she has exhibited at Haugar Vestfold Museum of Art in Norway and the Civic Museum Bassano del Grappa in Italy, and most recently she has presented a comprehensive solo exhibition, Fragile, at the Vejle Art Museum in 2012. Maria Rubinke’s first solo show at Martin Asbæk Gallery, It’s better to burn out than to fade away, was showed from the 11th April to 17th May 2014. 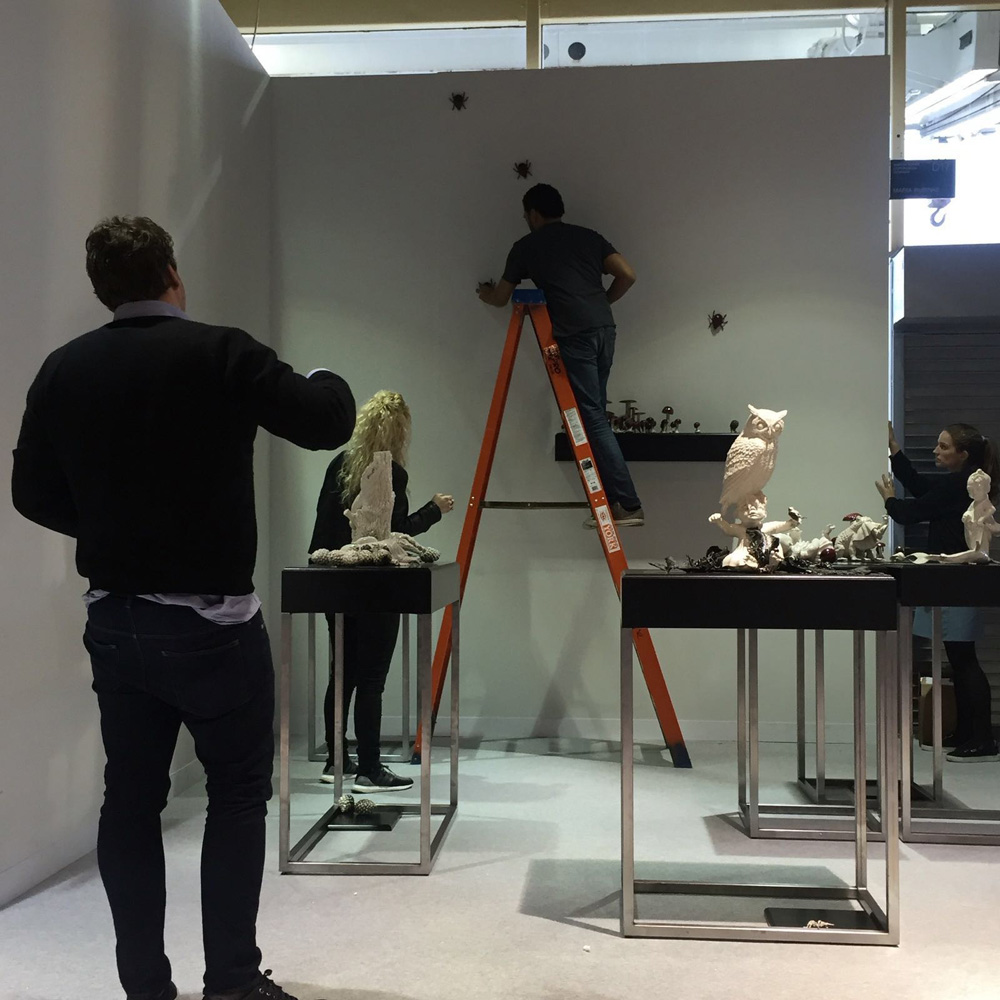 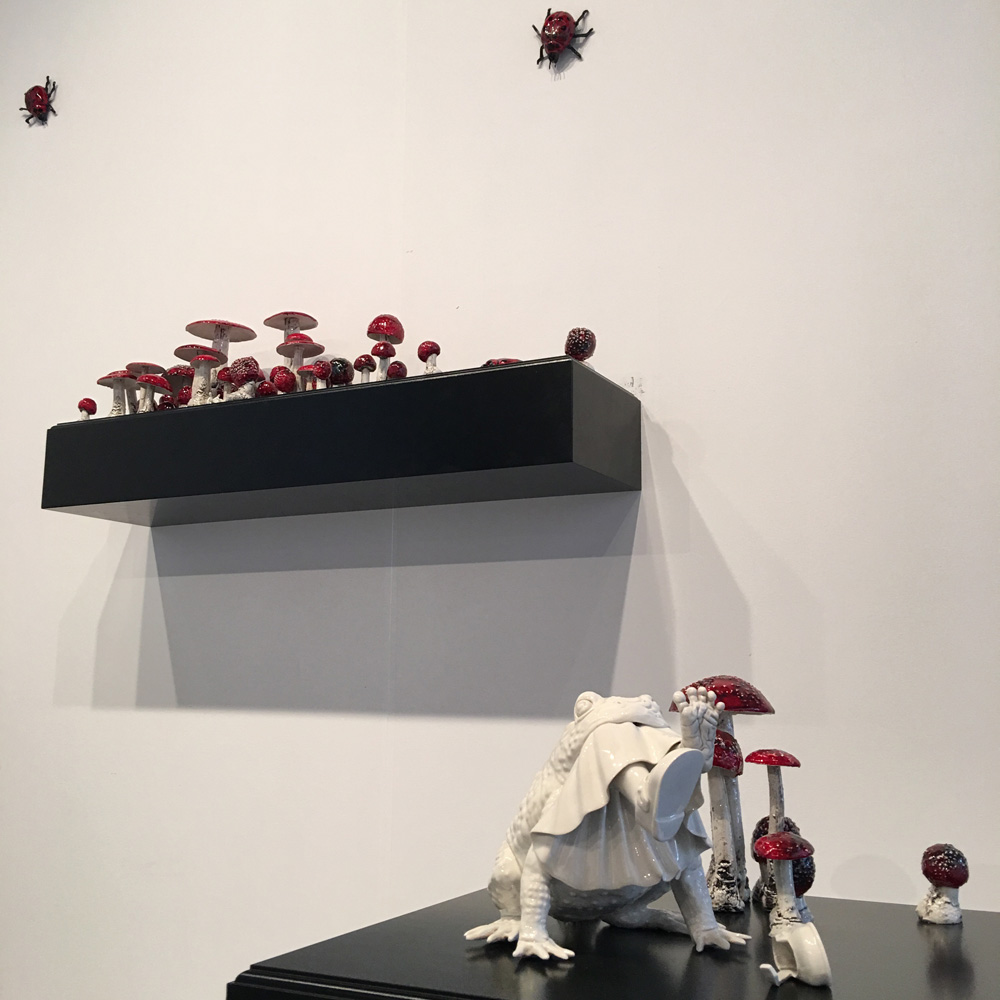 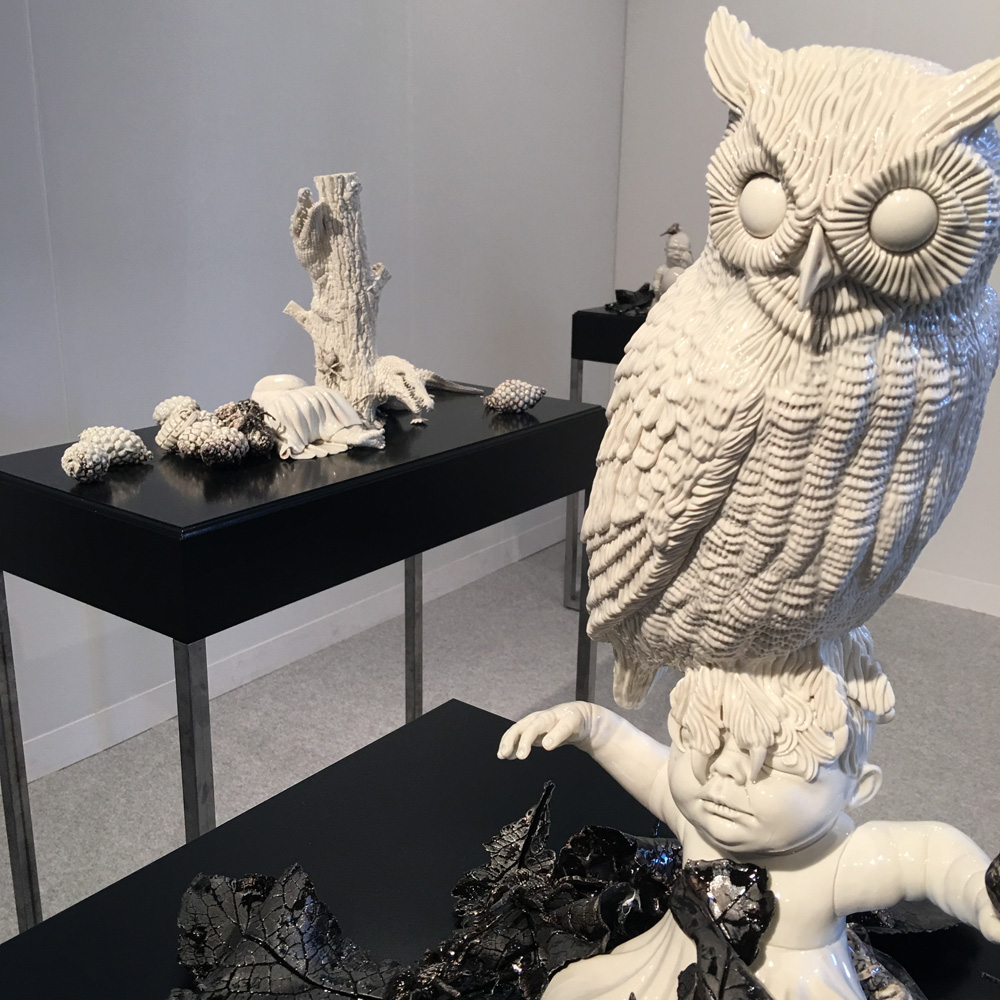 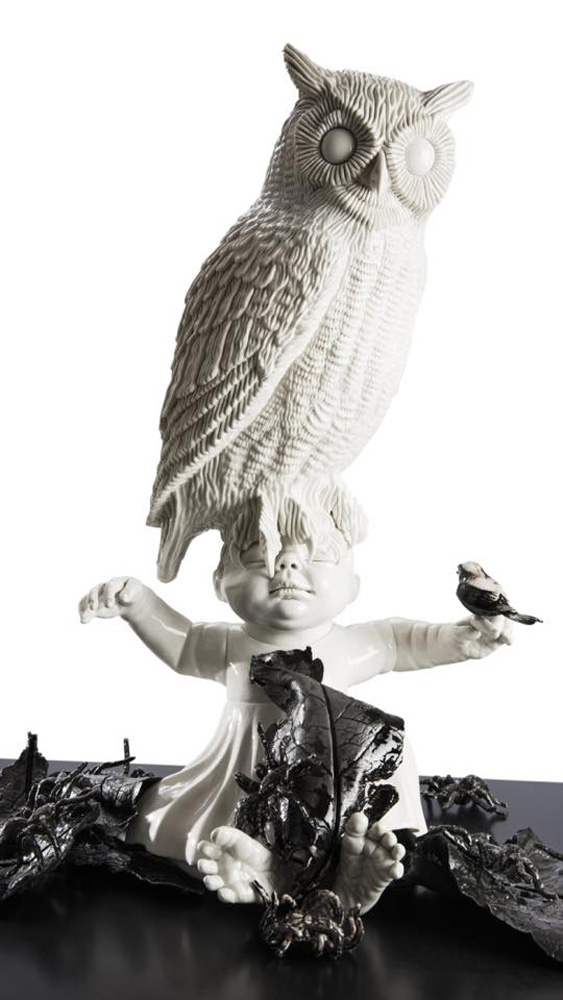 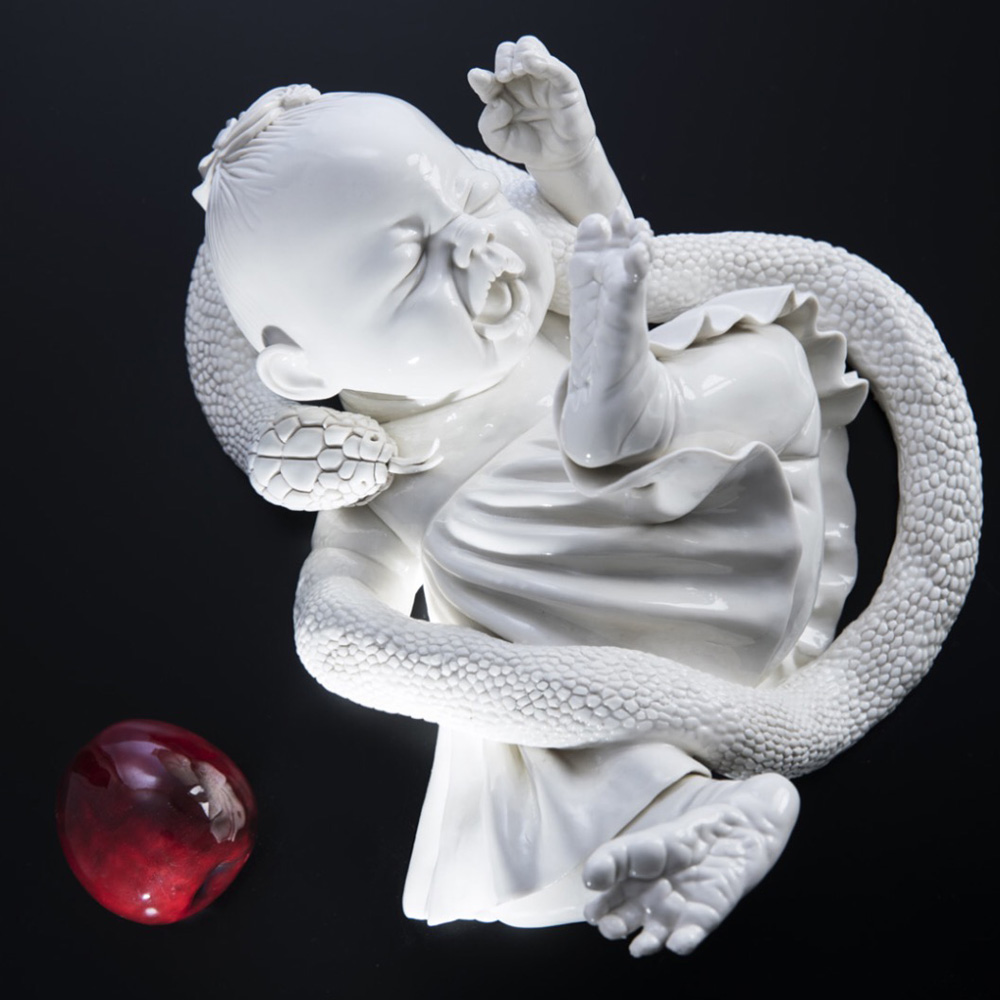 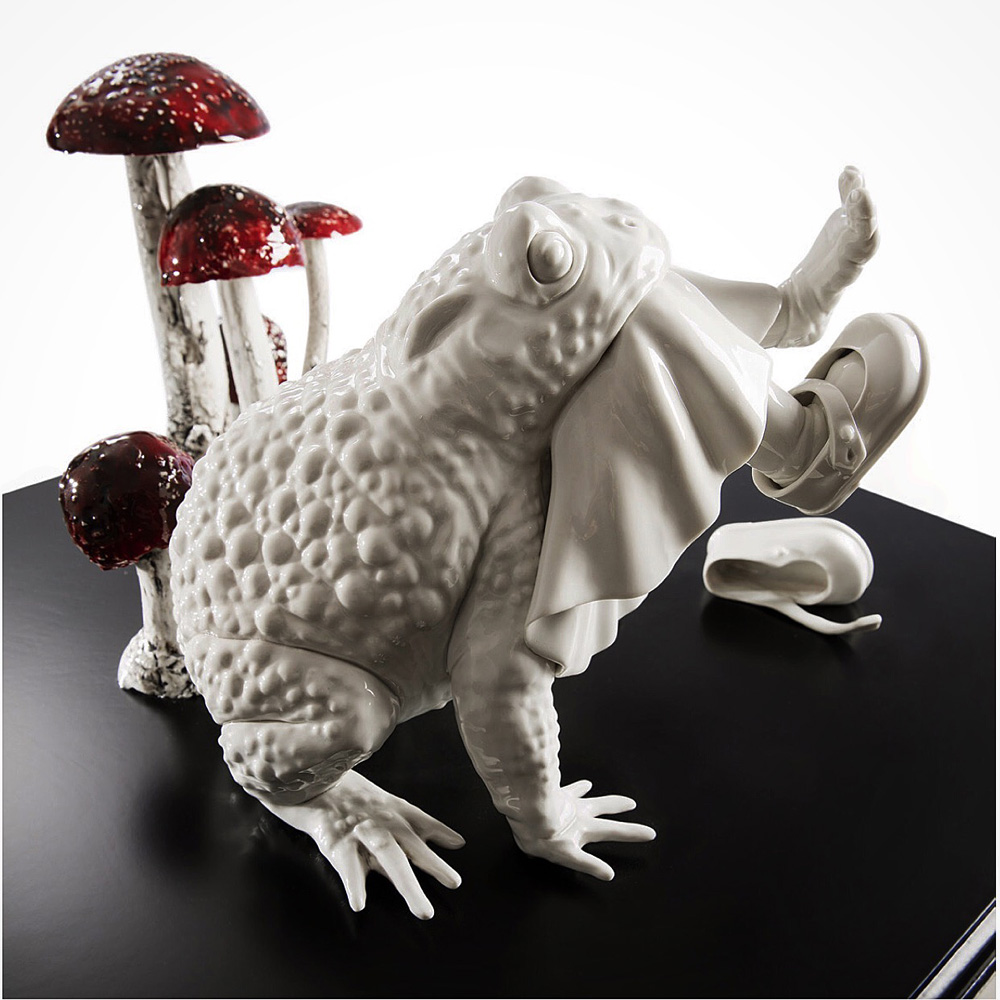